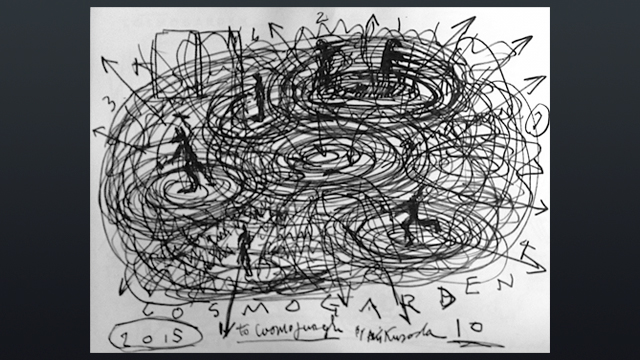 A biological term, « Edge effect » refer to the changes that occur at the boundary of two habitats.As the edge effects increase, the boundary habitat allows for greater biodiversity. This effect is also referred to create a New world or dimension, by reciprocal action occured on an Interface or encounter of different medias.Any being can not be evolved inside their safe territories,meaning the evolution only occurs around the edge by encountering the different beings.
It is exactly the same concept that « assemblage » gathering different things, Aki KURODA has been carrying as the core concept as an Artist.

Light and shadow, flat and bulk, Japan and France, Analog and Digital, ballet and Butoh…different or almost Contradictory elements will create a hole new dimension.

The noise will thrust the audience, the emerging lines on the canvas, corps of the dancers, generate the imaginable radiating threads. Tangle, tangled, the interface between the performer and  audience become blur, then the Invisible Labylinth appears in an open space.

When you are liberated from the labylinth,You will notice that you are always in your labylinth created between you and others,for this, you are the only one to decide or be capable of escaping from it.

“The snake which cannot cast its skin has to die.
As well the minds which are prevented from changing their opinions; they cease to be  mind.”